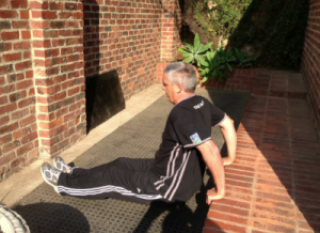 One of the challenges as I get older is to maintain a reasonable level of fitness. And usually when we return from holiday in South Africa I have to go on diet and start doing more exercise. So, being in South Africa for 4-5 months, I realised that some fitness regime is required and the solution is: Gym South African Style.

Back in the UK we live about half a mile from the countryside making it very easy to go for a walk or a cycle ride. And with some planning we have access to lovely landscapes within 30-minutes by car.

In South Africa it is not so easy to just step outside and go for a walk whenever you fancy as you have to consider the time of day. (Although you don’t have to worry about the weather!) Fortunately we are staying in a very pleasant area where it’s safe to walk during the day – but it’s not like the UK. 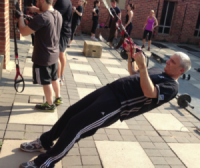 Some people cycle, but as cyclists come fairly far down on the road “food chain” and South African drivers are not the most considerate, I am reluctant to join them on two wheels! Outside the city, you really have to understand the risks – especially as a non-South African. (I have improved as I don’t freak out when I see a “Hijacking Hot Spot” sign any more.)

Gym South African Style – joining my father-in-law’s local gym in Pretoria a couple of blocks away. You can spot the house as it has many cars parked outside.

It’s an unusual setup: their yard is covered in mats with odd weights strewn around, some skipping ropes placed on the wall and lots of people exercising. 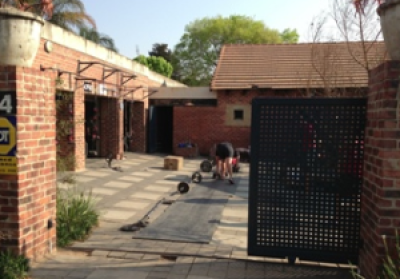 Every spare place on the wall has a rope attached and the treble garage has been opened up and filled with fairly old gym equipment. Strangely enough given the lack of cardio-vascular machines (one treadmill and one cross-trainer), they aren’t being used. The utility room has been converted to a boxing room.

The owner is Jannie Brooks, an ex Blue Bulls rugby player, and together with his wife, Adri, have set up a very successful enterprise.  Jannie is probably better known in the media for being “The Bladerunner“, Oscar Pistorius’s trainer.

He sets up a set of exercises for the day to meet (or exceed) your needs. E.g. we were given a set of abs exercises… straightforward enough… until he said to repeat them 5 times! Thereafter exercises using the ropes to do pull-ups and push-ups, a wall to do triceps’ dips and punches on the punch bags. After four circuits, we both agreed that it was enough! Jannie admitted that he set more than we could do to push us.

Everyone there is really friendly and the setup informal. No one is plugged into the latest podcasts as in the Hale Country Club. There are no TVs, so people talk to each other – it feels like a community. One problem with this for me is that the first language is Afrikaans, but once they realise I am English they switch languages happily. I love the way that all parts of the building are utilised – you don’t need sophisticated equipment to get fit.

I am going to be in South Africa for the next four months and shall be keeping in touch with further blogs and also on Twitter – follow me on @TimHermolle.

This site uses Akismet to reduce spam. Learn how your comment data is processed.